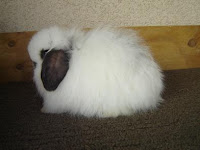 Him being a good boy giving me a pose =) 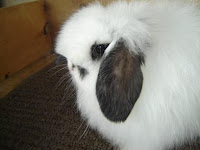 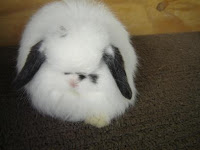 Showing off his massive head!

I mentioned a little slice of info on my site that I had obtained a new rabbit, so I thought I would indulge you guys on the particulars of this cutie =)
While I was at the Santa Maria Show last weekend, waiting for the Mini Lop's to be judges, I decided to stroll around & look at all the Fuzzies for sale. I've never raised Fuzzies, nor do I plan to, but I've had an obsession with them since the beginnging of this year, thanks to a few select breeders awesome looking Fuzzies =P.
I was actually looking at a Dianne's Hollands when I noticed she actually had a fuzzy available! I was excited, since I know Dianne doesn't breed Fuzzies, so this one is more or less an occasional occurence for her herd. This *adorable* Fuzzy Holland was unlike any other Fuzzy I had ever seen. Normally as juniors they look kind of scraggly, sometimes with matts. I noticed that this guy looked just like a miniature senior! And he had NO matts (Dianne was obviously taking awesome care of this little boy =)) I automatically asked Dianne how much he was. She said $35. I told her I'd think about it & went on my way, pondering over what to do lol. When I noticed another family looking at him, I asked her if I could have him. She said sure & there I went, with my own Fuzzy. After only begging my mom for 4 months. . . lol. Needless to say, I felt like I accomplished something =)
Charlie will be our little Mascot here at the rabbitry. I will be showing him often & will stud him out to any of my friends bucks =)
I've decided to add some pics of him in this post!
Michael
Silent Springs Rabbitry
http://www.geocities.com/silentspringsrabbitry07/index.html

Posted by silentspringsrabbitry at 9:49 AM No comments:

When & How To Choose Your Keepers

This blog will be devoted to how I 'cull' from my litters. I use the term cull loosely. Some people refer to cull as kill, while I simply mean selling that animal ;)

I normally start looking at babies once they hit around 3 weeks. With just about ANY 3 week-old baby, it's going to look perfect, lol. So don't judge there. I just start trying to get them to pose willingly, without me having to fight with them.

I normally go through litters at 5-6 weeks, giving myself mental notes on the animal. I'm looking for nice, short little ears, with a huge, broad head. Body is to be as deep as it is wide, with it being as short as possible. I also want to see a FULL hindquarter. I also cull any that have too much length in their shoulder or midsection, as well as low shoulders or a flat body. I should really start taking pictures of my keepers at 6 weeks, 10 weeks, 14 weeks, 20 weeks, 25 weeks, & 30 weeks. I will try to do that with my next litter ;)

Say I have 3 babies out of a litter of 8 that I just adore. I have a limited number of holes, so I can only keep two from this litter. Then I go to what I'm looking for in my herd. Say my herd lacks shoulder width, I'd want to keep the two babies with the widest shoulders. Say they ALL have wide shoulders. Then I say, what do I want, not what do I *absolutely* need. I'm always working with color, so color gets my preference. Say out of the three, one is a blue chinchilla, one a lilac steel, and the other a chocolate chesnut. The chocolate chesnut & lilac steel are more important to me, since they hold more of the 'rare' genes that I want in my herd. That's not to say that I'll pick a 'color' over a steel just for it's color ;)

There's my ramblings. . . . I hope you enjoyed them at least a little bit!

I have been fortunate enough to get a bunny from Sara Kitsemble of Kitsemble's Rabbitry at Convention! Sara has been BOSB at Convention for 2 out of the last 4 years, and consistently places nationally. I'm getting a Broken Chesnut Junior Doe out of Kitsemble's Bree & Kitsemble's Josiah! Bree is a RGC & was 10th place at '06 Convention, and Josiah has 1 Leg for being the first place SJB at the '06 Convention =) This girl just looks SO gorgeous from pictures, I can't wait to see how she is in person! Thanks so much Sara! I've attached some pics of the little cutie! Now to think of a name for her :D

on what's been happening ;) Sorry for my 'absence,' so to speak, school has been really busy for the past few weeks. In fact, this is the first day in a LONG time I don't have any homework or tests to study for, lol!

I don't think Merlot took. I palpated her yesterday and didn't feel ANYTHING :( I tried to breed her to Raymond, but he couldn't get the job done. I'll just wait it out until this after her due date and breed her a day or two before Dusty.

I sold Jack to Katie, to a great FFA breeder in KC. I hope he does well for her! Jack's siblings, Emma and Hannah, are developing really nice! The HEADS on these girls are awesome! I'm excited to start showing them in October. Once I get around to updating my site next month, I'll be sure to put them on there :)

I've sent in the Specialty entries already for the Santa Maria show already. I only have a few that have really nice condition, so I'm hoping they do well. I am expecting something from Perfection, he's looking *really* nice right now! He'd be almost a senior for that show.

Raymond, Blue Moon, and Purple Haze will be going to Convention presold in a few weeks. I'm sure they will be spoiled rotten in their new homes! It was especially hard to see Ray go, we've become the best of buds, but it's time for him to help someone else's herd. And, who knows, I might have a Convention rabbit brought back to me :D But I'll tell you guys about that if it happens.

silentspringsrabbitry
Welcome to Silent Springs Rabbitry Blog! I am an ARBA Registrar and I raise Mini Lop Rabbits in Central CA, specializing in Lilac and Chocolate varieties. We also raise BEW Woolies on a small scale. Hop on by and check out my site! We try to update it as frequently as possible.