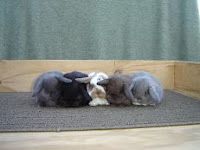 In order to show any rabbit at an ARBA Show, they must be legibly tattooed in their left ear. Without it your rabbit will be disqualified. Their right ear's are not to be tattooed unless it is going to be registered. But, how do they get the tattoos? Surely they don't appear out of thin air? I don't think so, even though I'm sure they disappear often enough as the ink fades. Here are several common methods that people use to tattoo rabbits.
- an electric tattooer
- a clamp tattooer
- a needle
Of course, you will also need ink. India ink is highly desirable because it is less likely to fade than the ink that sometimes comes with your tattooer.

The needle is the most crude form of tattooing on this list and I don't like it all that much. It is highly time consuming and meticulous work. You have to poke individual holes into the ear until you form a symbol and continue this until you have finished the tattoo (which is generally several symbols long).

The clamp is a step up from the needle and is popular with many breeders. They are typically metal and you slide the symbols that you want into a slot. You then position the clamp in the rabbit's ear and press down - hard. Afterwards you lather ink into the holes that you made with the clamp. Several things could go wrong, such as you hitting a vein, which would involve a large mess for you to clean up. I have also heard of stories of the rabbits breaking their backs from this. It is thus recommended that you do not try to restrain them too much while using the clamp.

My personal method of choice is an electric tattooer. There are numerous different brands available since every breeder needs one. I personally chose the Rabbitat for it's affordability and quality. For those with legible handwriting you will probably find this option the best for you. You simply dip the tattooer into ink and then 'write' the numbers in the ear. I like to place them in lap and cover them a towel with their ear sticking out. If they get freaked out them I just stop for a minute and then begin again. I just did seven juniors yesterday and it only took me a few minutes!

The photo above is of a litter I had a few years ago when I still focused on breeding chocolates. Does anyone see any familiar faces in there? (:

- Michael
Posted by silentspringsrabbitry at 7:53 AM

silentspringsrabbitry
Welcome to Silent Springs Rabbitry Blog! I am an ARBA Registrar and I raise Mini Lop Rabbits in Central CA, specializing in Lilac and Chocolate varieties. We also raise BEW Woolies on a small scale. Hop on by and check out my site! We try to update it as frequently as possible.